Posted on May 4, 2018 by pengeandcatorcouncillors

Thank you to everybody who supported us yesterday in the Bromley Council Elections.  Kathy Bance and Kevin Brooks were re-elected with 3259 and 2828 respectively. They are joined by Simon Jeal who replaces Peter Fookes with 2692 votes. The turnout was 40%. Elsewhere, Labour gained a third seat in Clock House with Josh King elected to Bromley. The full make up of Bromley is 50 Tories, 8 Labour and 2 Independents in Biggin Hill. For more information, please go to http://www.Bromley.gov.uk   Below are Simon, Kathy and Kevin outside the Penge Cenotaph in the High Street. 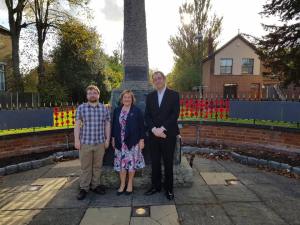 This blog is maintained by Cllr Kathy Bance MBE, Cllr Peter Fookes and Cllr Kevin Brooks, the Labour Party councillors for Penge & Cator ward on Bromley Council.
View all posts by pengeandcatorcouncillors →
This entry was posted in Uncategorized. Bookmark the permalink.